Alexey Miller, Chairman of Gazprom's Management Board, and Vasily Orlov, Governor of the Amur region, held a meeting in St. Petersburg today.

They discussed the issues of cooperation. Among them is implementation of the program for development of gas supply and gasification of the region in 2021–2025. It became possible to start the network gasification with the commissioning of Power of Siberia main gas pipeline.

The parties noted that the work is on schedule. Construction of an inter-village gas pipeline from the Uglegorsk gas distribution station to the municipal boiler house of Tsiolkovsky (it supplies heat to two residential neighborhoods) has completed this year. Gas supplies to it began in the fall. This is the first boiler house in the region connected to the gas supply network.

Gazprom intends to complete the construction of the gas pipeline branch, gas distribution station and inter-settlement gas pipeline to Svobodny by the end of the year. It is planned to build a natural gas liquefaction complex here in the Svobodnensky district. Gazprom Helium Service LLC and JSC Russian Far East and Arctic Development Corporation signed a cooperation agreement in September 2021. Gazprom Helium Service plans to produce LNG for its own fleet. Liquefied gas can also be used for autonomous gasification for the consumers in the region. 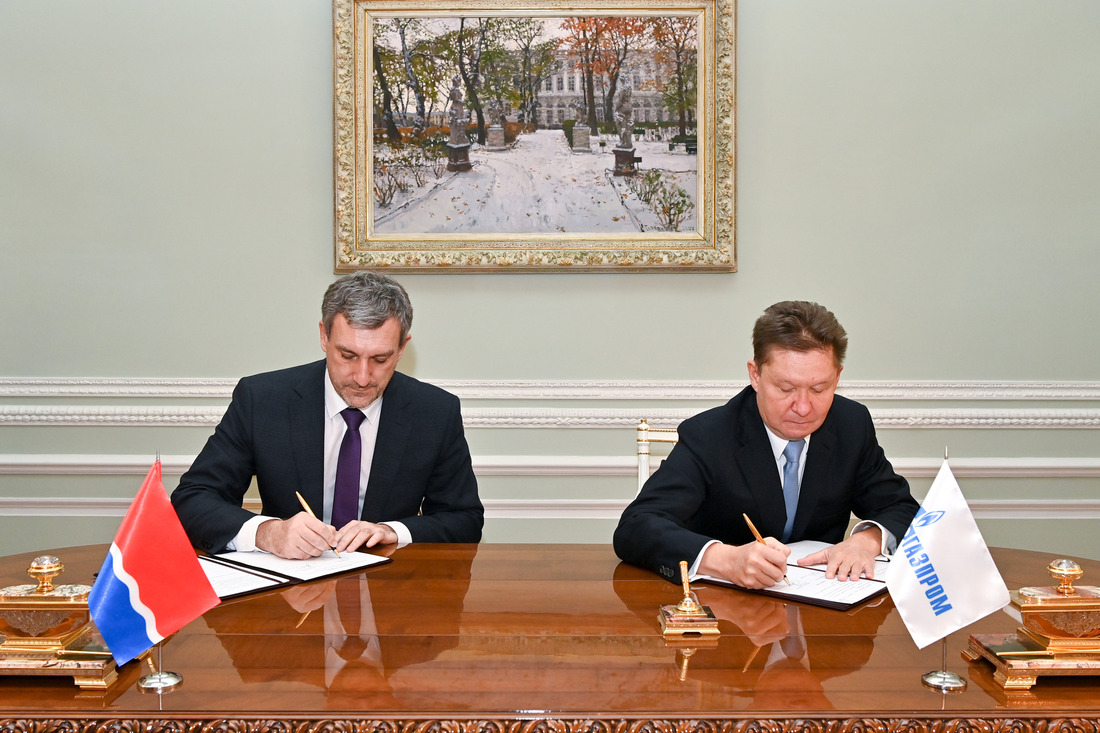 During the meeting, Alexey Miller and Vasily Orlov signed a memorandum of intent for implementation of the stand-alone gasification project of the Amur region. Regional government will develop a feasibility study for conversion of the regional boilers to LNG with construction of proper infrastructure for its reception, storage and re-gasification. Decision will be made on feasibility of transitioning to practical implementation of the project based on this document.

The meeting attendees also discussed the progress of construction of the Amur Gas Processing Plant.

Another important topic is Gazprom's participation in development of the regional sports infrastructure. In particular, a sports and recreation complex with a universal hall was opened in Blagoveshchensk in 2021, and a martial arts center operates on its basis. Construction of a complex in the village of Tambovka (Tambovsky district) is in its final stage. Construction of three more sports and recreation complexes is underway: in Blagoveshchensk, Magdagachi, and Tynda (this one will become the largest sports facility in the region).

Gazprom and the Government of the Amur region have signed a cooperation agreement.

A program for development of gas supply and gasification of the region for 2021–2025 was signed in December 2020. Gazprom's investments will amount to 2.145 billion rubles.

Amur Gas Processing Plant, one of the largest in the world, is being built in the area of Svobodny in Amur region. Its design capacity will be 42 BCMA of gas.

Multifunctional sports grounds and school stadiums have been built in the region, assistance has been provided in re-construction and repair of the sports facilities (including the re-construction of a sports complex with a swimming pool in Svobodny) under Gazprom for Children program.

The company assisted in construction of a church complex in Svobodny.